The ACE Family is a popular YouTube channel having millions of subscribers run by Austin McBroom and Catherine Paiz who are a couple from California. They do vlogs, pranks as well as various challenges which viewers seem to love. Within a short of span of just 2 years since starting this channel, they have garnered millions of followers thanks to the virality of some of their videos.

The Austin McBroom and Catherine Paize, or the Ace Family net worth is estimated to be about $20m USD in 2020 where the majority of the revenue comes from YouTube where it’s estimated to be around $20k per day!  They have an amazing story on how they found stardom as youtubers.

Austin McBroom was born on May 20, 1992 whilst Catherine Paiz was born on August 24, 1990. Austin was a former basketball player who played for St. Louis University’s basketball team in the NCAA.

In his early days, Austin was also active in other sports like baseball and soccer. Catherine on the other hand is originally from Canada but her family moved to Florida. She also went to the same University as Austin which is where they first met. She worked as a model during her time there with some associations being with Azzelia Swimwear. She has also been a VIP Manager at Arkadia Miami.

After his college basketball career, he decided to switch and focus his career on social media platforms like YouTube and Instagram. The two had initially started vlogging with their own names together starting with a modest 1000 subscribers. However, later they noticed the potential for growth that was possible and create a more branded channel name called the ACE Family.

Some of their most popular videos are those that are related with pranking other people. These include “The Best Prank of All Time”, “Epic Car Accident Prank” and “Break Up Prank On Girlfriend”.

One of the strategies they used was the viral nature of memes. By becoming memes themselves, they started to gain massive attention and popularity. This helped them to gain followers and subscribers on different platforms in very large numbers and it quickly started accumulating to large volumes.

One of their earliest achievements was reaching 1 million subscribers on April 5, 2017. Just a few months later on August 2, 2017. By April 16, 2018, they had crossed 7 million subscribers. The level of growth they have had on Youtube as well as other platforms is truly remarkable. Catherin has 4.3 million followers on Instagram whilst Austin has about 3.7 million followers as of writing this article.

The Ace Family Net Worth

It is estimated that they annually earn more than $5 million from Youtube alone. Their net worth is expected to be somewhere around $20-$30 million. This is a very high number considering they have only been very active for this in the last few years.

They have used the Ad program offered by Youtube. There is also a program known as Google Preferred where deep-pocketed companies can target ads on the top 5% most popular content. The ad rates here are higher than normal. This is a feature that their channel has been able to use. They also have their own shop online which has a variety of merchandise including hoodies and T-Shirts. Their products have very creative taglines that have been backed up by very smart marketing.

Another big source of their income is the numerous sponsorship deals that they do. Some products they have promoted include The Cooking Fever App, Dollar Shave Club, Best Fiends, and SeatGeek.

Austin and Catherin started dating in 2015. Later, they gave birth to their first child named Elle on May 28, 2016, who is an Instagram influencer in her own right. The two announced their engagement in August 2017. Through their recent vlogs, it was announced that Catherine is now pregnant with the couple’s second child.

He also does charity basketball events. He is set to play a match against Youtuber Ricegum to raise money for various causes. This event that is set to take place in June will see the teams compete to donate $50,000 for charities of their choice.

The family is also friends with Kylie Jenner, who surprised a lot of their fans after she appeared in one of their videos to reveal the gender of their upcoming child. As a matter of fact, they were one of the few people that actually knew about Kylie’s secret pregnancy. 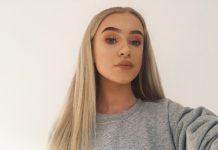 Harry Eriksen
If you are familiar with the fashion world, you know who Tommy Hilfiger is. He is an American fashion designer that offers...