Kevin De Bruyne is a Belgian professional footballer who currently plays for the Premier League club Manchester City. Pep Guardiola has mentioned him to be the best player he has ever seen, after the Barcelona star Lionel Messi. His playing style has led him to be referred by many as a “complete footballer”.

Kevin was born on 28 June 1991, in Drongen, Belgium. His early interest in football led him to start playing for a club called KVV Drongen in 2003. This was his phase of development and he continued honing his skills there for 2 years. After that, he decided to join the club Genk. His progress was tracked by the mentors at Genk and by 2008, he was already playing for the first team squad.

He would start getting exposure to playing at a higher level which benefitted him a lot as he got to play alongside many experienced veterans. One of his early moments that many would be impressed by was his 2010/11 season performance at the club where he scored five goals and made 16 assists in 32 league games. Thus, he was part of the team who were the Belgian champions that year.

In early 2012, Kevin inked a deal with Premier League Giants, Chelsea on the winter transfer deadline day for a deal worth around £7 million. This was a long term deal for five and  half years. He couldn’t make a big impact at the start of his time at the new club and was sent on loan to Werder Bremen in the Bundesliga for a year. His tenure there was successful and though he had offers from bigger clubs in the Bundesliga, he decided to return to Chelsea after the assurance of then-manager Jose Mourinho.

But his time was not fruitful at Chelsea and Kevin started looking for options. In early 2014, it was announced that he had signed for Wolfsburg for £18 million. It was here in his new club that the best of De Bruyne would be seen. That year, he played an instrumental role for the club, helping them have a successful season. He became known as the assist king, raking up a new record of 21 assists that same season. He also helped the team win the 2015 DFL-Supercup against Bayern Munich.

Rumors had been circulating for a long time that De Bruyne might seem make a move with Manchester City having the highest interest in the midfielder. The man who had even been shortlisted for the Ballon d’Or, had been offered a great contract by Manchester City. Eventually, the deal happened and De Bruyne’s journey at City began. In the couple of seasons he has been at the club, he has already made a big impact helping City win the league in the 201718 season. 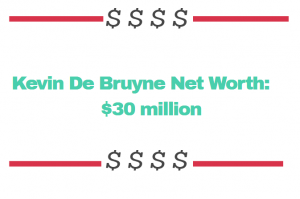 As of 2018, it is estimated that De Bruyne has an estimated net worth of a staggering $30 million. He joined City for £55m and it has proven to be a great investment. He has now signed a new contract with the club keeping him at the Etihad stadium until 2023.

In 2013, news emerged that De Bruyne had a feud with fellow Belgian player Thibaut Courtois, who reportedly had an affair with his then-girlfriend, Caroline Lijnen. However, the two have set apart their differences since then. Later, De Bruyne would start dating Michèle Lacroix. The two married in 2017 and have a child named Mason Milian De Bruyne.

What is Larry David’s Net Worth?